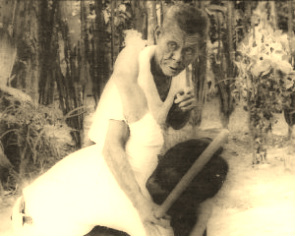 Balintawak was created by Venancio "Anciong" Bacon in Cebu City, Philippines. Standing at 5 feet, 2 inches tall, and no more than 120 pounds he was dimunitive in physical stature, a giant in terms of his influence and impact in Filipino Martial Arts history. Bacon was born in 1912 in Carcar, Cebu.  His teacher was Lorenzo "Ensong" Saavedra, considered the patriarch of Cebuano eskrima who established the first Eskrima organization of the Philippines, the Labangon Fencing Club. The Labangon Club was dissolved in 1931 and a new group, the Doce Pares Club was formed in 1932. Bacon was an original member of the Doce Pares Club. In 1952 Bacon left the Doce Pares Club with several of his loyal students to form a new club, the Balintawak Street Self Defense Club.

Bacon learned the Corto Linear style from Saavedra but was also an expert in different styles of eskrima as well as being skilled in empty hand fighting and combat judo. He combined all of these influences to produce his very unique and original style of eskrima. The club trained in the backyard of a watch shop owned by one of Bacon’s students which was located on a small side street in Colon, called Balintawak Street. Eventually the name “Balintawak” became synonymous with the style.

Bacon was incarcerated for killing an attacker who ambushed him. The attacker was armed with a knife and although Bacon’s response was self-defense, the judge ruled Bacon’s martial arts skills could be considered a lethal weapon and should have been used with restraint and control to disable his attacker, rather than kill him. Bacon was paroled from prison in the mid-1970’s and upon returning to Cebu continued to check on the progress of his students and the next generation of Balintawak Eskrimadors. Anciong Bacon died in 1981. Today the legacy of Venancio Anciong Bacon lives on through the many Balintawak organizations and schools that have emerged.