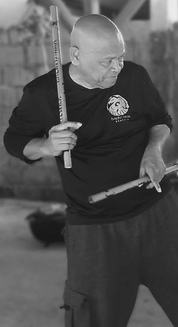 As a young student of Balintawak Eskrima, Bobby Taboada made a bold statement to his teachers that one day he would promote the art to the world. Today he is recognized as one of the pioneers and most visible proponent of introducing Balintawak outside of the Philippines. His International Balintawak organization based in Charlotte, North Carolina, is global. Prior to learning the art of eskrima, GM Bobby's martial arts background included Shotokan Karate and Western Boxing. Known for his dynamic and explosive brand of eskrima, GM Bobby was a veteran stickfighter of combat and tournament competition.  He was trained by all the Balintawak masters in the practical aspects of combat fighting, including: Balintawak Founder Great Grandmaster Anciong Bacon, Grandmaster Jose Villasin, and his primary teacher Grandmaster Teofilo Velez.  GM Bobby's mission is the same as when he left the shores of the Philippines in 1979 - to promote Balintawak Eskrima worldwide.

Having experienced violent and deadly fights and taught the "old school" way, which was often brutal, he emphasizes training safely. GM Bobby conducts training for law enforcement officers,  martial arts instructors (of all styles), and those individuals who he thinks have attained maturity, discipline and the capacity necessary to learn his art. He states,  "In my 50+ years of experience in martial arts,  I believe the hardest thing to learn is how to defend, the easiest is how to strike, hit, punch or kick."  Based on this philosophy he places primary emphasis on defense and the counter. His advice to students of all martial arts:  "All martial arts have something good to offer, take it, study it, practice it, think about the counter, then it is yours - then one day you will be one of the masters."